Sub-Title: Insects as food for humans: the role of insect rearing Part I

The prospects of using insects as human food to meet future needs of a growing world population has become a topic of lively discussion.  For example, van Huis (2013) and van Huis et al. (2013) provide arguments about the benefits of what has come to be called “entomophagy” or what I call “entomophagy by humans” in light of my experiences with the many instances when entomophagous animals other than humans are discussed and studied.  And, in fact, in the mix of proposed uses of insects as livestock feed and as human food has stimulated considerable discussion and some research.  I have reviewed some of the papers on insects as human food in the 2nd edition of my diet book, but I did not cite an important and very thoughtful paper by Lundy and Parrella (2015) on the ability of crickets (Acheta domesticus) to capture protein from various diets, including waste streams.

Spoiler Alert: I approach this subject with skepticism. I think that the excitement about really meeting the needs of the growing human population with insects as a significant source of food (or protein, as it is popular to say is somewhat irrational—at least based on our current state of knowledge.

I will be spreading my discussion over several blog posts on this site.  I realize that my answers to the above questions may be discouraging to insects-as-human-food enthusiasts, but I hope that the critical thinking that I am offering will stimulate thought and perhaps help the entomophagy enthusiasts be more prepared to succeed in their enterprise by having a realistic understanding of possible problems. 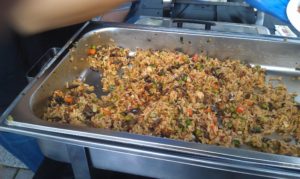 So in answer to the first question about whether or not people will accept insects as food, I see no question about this.  First, people have been eating insects in various cultures worldwide, using locally abundant insects with a great variety of preparation techniques.  Second, there is an increasing effort to render insect nutrients (especially insect proteins) into processed materials such as meal worm meal, cricket flour, and so on.  The processing can concentrate and possibly improve the food quality and simultaneously disguise the insect components.  So a meal worm bread that contains flour made from drying and grinding meal worms can go unnoticed in a person’s meal.

The enthusiasm for insect-eating can be seen at the annual Bug Fest in Raleigh, North Carolina where hundreds of people line up to get dishes prepared by local restaurants where the chefs have incorporated insects into savory dishes.  The video above shows some of this, and the cricket stir fry photo help make this point.  People can learn to eat insects just as they have other arthropods such as shrimp, crabs, lobsters, and crayfish.

*I have borrowed the term from Alan Greenspan, chairman of the Fed, and a term which Greenspan is said to have derived from Yale Professor, Robert Schiller (https://en.wikipedia.org/wiki/Irrational_exuberance).