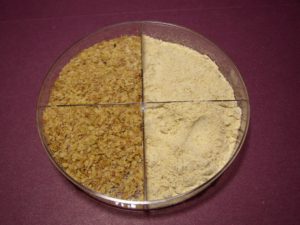 Wheat germ from two different sources: which one is best for your diet?

The power of wheat germ as a diet component: a revolutionary breakthrough!

There is no way to express the magnitude of influence that the introduction of wheat germ has had in the science of entomology and in related disciplines.  There have been huge scientific, economic, ecological, and social impacts from this remarkable innovation since its introduction more than 57 years ago.   More than 1000 citations of the rearing paper on Manduca sexta (the tobacco hornworm) have been made for this paper: Bell, R. A. and F. G. Joachim.  1976.  Techniques for rearing laboratory colonies of tobacco hornworms and pink bollworms (Lepidoptera-Sphingidae-Gelechiidae). Ann Entomol. Soc. Am. 69: 2:  365-373 and nearly 300 more citations refer to the original M. sexta rearing paper from which the Bell and Joachim diet is derived (Yamamoto, R.  1969.  Mass rearing of the tobacco hornworm: II. Laval rearing and pupation.  J. Economic Entomol. 62: 1427-1431.  Besides these 1,300 references to the tobacco hornworm diet, there are thousands of other papers that refer to wheat germ as a principal component of diets for scores of other insects, and beyond the research/ scientific scope of wheat germ influence in insect diets, programs such as the pink bollworm sterile techniques program and many other mass-rearing programs depend hugely on wheat germ.  This would make the influence of the wheat germ diet have an impact of billions of dollars over the years since this deceptively simple-sounding advancement was made in 1959.

How did wheat germ get introduced into insect rearing?

The great USDA, ARS scientist, Dr. Erma S. Vanderzant (January 30, 1920-November 2, 1999) was a biochemist who worked at the College Station USDA Laboratory associated with Texas A&M University.  She had worked for years on diets for cotton insects, including boll weevils, pink bollworms, Lygus bugs (western tarnished plant bugs), and to a lesser extent, green lacewings.  She laid down many of the nutritional and biochemical fundamentals of these insects, and in my opinion, she never fully received the full credit for the amount of advancement that her meticulous and insightful studies had provided our community.

An inauspicious start for wheat germ!

In 1959, Dr. Vanderzant and her colleagues published a paper on feeding and oviposition of boll weevils (Vanderzant, E. S., C. D. Richardson, and T. B. Davich.  1959. Feeding and Oviposition by the Boll Weevil on Artificial Diets.  J. Econ. Entomol.  52: 1138-1142.)  In that paper, wheat germ was shown to be of unspectacular value in one of several diets, but it had one distinguishing quality: it served as an oviposition stimulus: something that had been problematic to the several researchers trying to mass-rear boll weevils without using host materials (cotton bolls or extracts from cotton bolls: it was the efforts that Robert T. Gast had made to extract cotton bolls that led to his untimely death resulting from an explosion of an autoclave during a solvent-based extraction process at the USDA, ARS boll weevil lab in Starkville, Mississippi).

But for some reason, Erma Vanderzant and some of her colleagues decided to try wheat germ in the diet of pink bollworms, another cotton pest that had proved elusive to development of really practical diets that would economically and reliably support development of multiple, continuous generations of “pinkies” for sterile release and other management programs.  The results of this work were published the year after the debut of wheat germ in this paper: Adkisson, P. L., E. S. Vanderzant, D. L. Bull, and W. E. Allison.  1960. A wheat germ medium for rearing the pink bollworm.  J. Econ. Entomol.  53: 759-762.  As the saying goes, “the rest is history.”  The application of wheat germ to “pinkie” diets was such an impressive success, that hundreds of other authors followed the teachings of Erma Vanderzant about the wonderful efficacy of wheat germ as a major component in insect diets.  In the nearly 60 years since the advent of wheat germ in insect diets, we have come to understand SOME of the properties of this material that makes it such a suitable diet factor, but there is much more that needs to be understood.

I strongly advocate the exploration of the reasons WHY wheat germ is so helpful to insect feeding efforts, and I will discuss some of these questions in near future postings on this site.