Our rearing program is an outgrowth of nearly 40 years of research by Allen C. Cohen.  Allen’s past research on rearing and insect feeding systems biology began at the University of California, Riverside in the mid-1970s (with studies on desert cockroaches and blister beetles), continued at the University of Arizona and the USDA, Agricultural Research Service with predator rearing and mass-rearing of Lygus bugs and various Lepidoptera species in Tucson, Arizona and on cotton insects in Phoenix, Arizona.  Allen finished his ARS career at Mississippi State University with the Biological Control and Mass-Rearing Research Unit (in the early 2000s), and he spent about 6 years running a small research/consulting business on insect diets and rearing systems.  In 2010, Allen became a Research Professor in the Department of Entomology at North Carolina State University, where he has worked with dozens of insect species, developing diets, working out mass-rearing technology, and doing basic work on insect feeding biology.

The rearing program currently consists of several projects with special emphasis on the biology of waxworms (greater wax moth, Galleria mellonella), the matrix properties of insect diets, including the physicochemical nature of the diets, and rearing system optimization using design of experiments. The waxworm studies are focused on issues of diet-induced thermogenesis as illustrated by these thermal images:

Diet Matrix and Physicochemical Characteristics. Other current research in Professor Cohen’s laboratory deals with rearing system inquiry using the powers of design of experiments to explore biological aspects of rearing system components as well as physicochemical investigations of such factors as diet texture, diet pH, antioxidants (anti-free radicals), and various other diet and rearing system phenomena. One of our most intensive inquiries questions the factors that contribute to diet texture as a basis for diet palatability and stability.

Note in the top figure, the hornworm diet is a complex mixture of nutrients and functional components (antioxidants, texturizers, and antimicrobials, for example), and the nature of the interface of the diet components along with the processing (mixing, heating, shaping, and storing) results in sensory properties of the diet, as well as bioavailability and stability of the diet. In teasing out the factors that contribute to the diet’s overall characteristics and suitability for the target insect, we see that casein and torula for example have complex effects on the diet’s hardness–effects that are not predictable from an intuitive approach. Therefore, the multiple-factor design of experiments approach is the most effective way to understand the kinds of interactions between the five selected diet components that were tested. 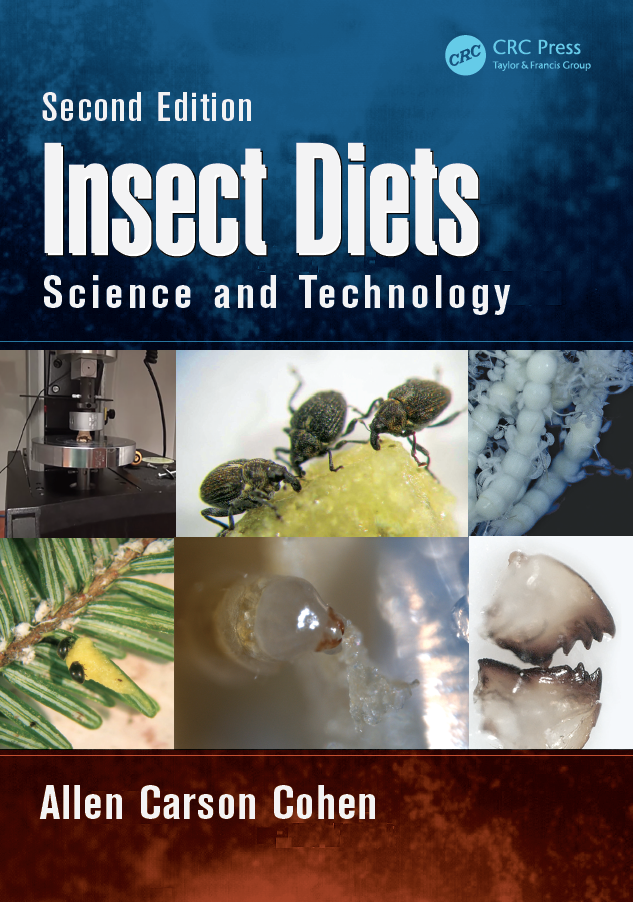 New book by Allen Carson Cohen coming out in May 2021

The latest book by Allen Carson Cohen will be released in May, 2021. It contains a comprehensive treatment of insect rearing systems from the ancient practice of silkworm rearing through 2020. It treats insect rearing as a science and explains how design, operation, and control of rearing systems are applied.