Basic and Applied Science in Insect Rearing: Part I on Screwworms 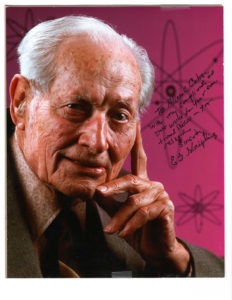 Signed photo of E. F. Knipling who was honored by USDA, ARS in an article in Agricultural Research Magazine

One of the most heralded programs in entomology, possibly in science as a whole is the sterile insect technique (SIT) for suppressing or eradicating screwworms.  I present here a little background on the connection between insect rearing and application of SIT.  I start with a quotation from E. F. Knipling, who had long been a supporter of insect rearing as a science that supported other insect management programs such as SIT and biological control (unknown to more casual observers, Dr. Knipling was a GREAT supporter of biological control, including augmentation.  He wrote a book on the efficacy and possibilities of biological control by parasites, and he included predators and augmentation of both predators and parasitoids as an important potential for pest management on an area-wide basis.  He wrote:

“Mass rearing of insects is still a young science. With the help of insect geneticists, insect nutritionists, and insect behaviorists, insects might be reared under conditions that will make them equally, if not more, vigorous and more adaptable to the environment than the wild population. These improvements are likely to occur after further experiences and research.”  E. F. Knipling 1979

In the 2016 ESA National Meeting, Dr. Knipling’s work (for example, see the quotation from the ESA Newsletter announcement of Dr. James’ lecture*).  I have used in a paper that I wrote for American Entomologist the quotation from E. F. Knipling’s 1979 chapter to fortify my discussion of the pivotal role of insect rearing in entomological programs.  The quote reflects Dr. Knipling’s recognition of rearing as a science and that with the right kinds of input can lead to production of better quality insects that are more available for various programs.  It is also clear that Dr. Knipling had the vision that further “experiences and research” were needed to improve rearing science.

But for the current blog page, I wanted to fortify the point about basic science, in general.  I have cited a recent paper in Animal Behaviour (by Brennen, Clark, and Mock 2014) about the importance of basic science.  The authors clearly convey that basic science is of value far beyond the immediate scope or vision that most of us have initially. Brennen et al. cite the widely discussed treatment of Dr. Knipling’s work on screwworms, where Knipling was “awarded” a Golden Fleece Award for his having been funded for $250,000 to study on “The Sexual Behaviour of the Screwworm Fly,”  It has become a near-legendary example of near-sightedness by politicians like Senator Proxmire (D-Wisconsin from 1957-1989) that Knipling’s funding to study the mating behavior of screwworms, which was the foundation of SIT: that a female fly mates once, while males (including sterile males) mate multiple times.  Brennen et al. pointed out that the leverage from the 1955 Knipling study was amplified from $250,000 to $20,000,000,000 advantage in reduction of damages to US cattle.  Of course this economic and environmental advantage has continued to amplify itself due to the continuing positive effects of screwworm eradication throughout the US and Central America.  A further advantage of the sterile screwworm program is the demonstration (proof of principle) of SIT for tephritid fruit flies, pink bollworm, coddling moth, and several kinds of disease-transmitting biting flies.

*“Dr. Anthony A. James, a distinguished professor at the University of California, Irvine, delivered the Founders’ Memorial Award lecture at the 2016 International Congress of Entomology (ICE 2016). The subject of Dr. James’ lecture was Dr. Edward F. Knipling, winner of the World Food Prize (1992), the Japan Prize (1995), the FAO Medal for Agricultural Science (1991), the President’s National Medal of Science (1967), and many other awards.”

“The Sexual Behaviour of the Screwworm Fly: One of the recipients of a Golden Fleece Award was E. F. Knipling for his research into the sex life of parasitic screwworm flies. Knipling developed the sterile male technique to eradicate this cattle pest, based on observations during the 1930s that male screwworm flies will mate with many females, while females will mate only once. He used this information to devise a male sterilization strategy using -rays. He released sterile males into the population and in a few generations completely eradicated this parasite. Knipling’s $250,000 grant from the Department of Agriculture led directly to a program estimated to have saved at least $20 billion for U.S. cattle producers. The sterile male technique is currently used as a standard eradication technique on many agricultural pests (Knipling, 2005; http://www.innovationtaskforce.org/docs/Screwworm.pdf).”