Sub-Title: Insects as food for humans: the role of insect rearing Part II 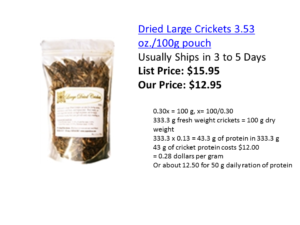 Price of crickets available online. The cost of a 50 g ration of protein (recommended by FAO/WHO for human adults) is about $12.50 US dollars.

In the previous blog page on this topic, I gave an overview of the potential for using insects as human food to make a significant impact on the goal of meeting the growing need for food for a population of humans that is expected to rise from about 7.5 billion in 2016 to more than 9 billion people in 2050.  I introduced the following paragraph and I answered the first question about whether enough people would be willing to accept a new food source to make a difference.  I answered this affirmatively, meaning that based on current cultures and anticipated needs, people WILL be willing to eat insects as a significant part of their diet.  Now, reminding the reader of the overview paragraph, I will discuss the second question.

Although standards will differ from country to country and the influence as such organizations as FAO (Food and Agriculture Organization of the United Nations) and WHO (World Health Organization)–(not to mention such organizations as the USDA and the US Food and Drug Administration will provide guidelines or regulations, the issues of food value of various insects and food safety of insects intended to be incorporated into the human food chain must be much better understood than they are currently.

As for food value of various insects, a very well-cited work is the paper by M. D. Finke (2002) which provides proximate nutrients (gross composition of proteins, lipids, carbohydrates, and minerals) of several commonly used feeder insects.  Other papers are appearing with increasing frequency in both entomological journals as well as food science journals.  The papers of Longvah et al. 2011 and Zhou and Han 2006 are good examples of nutritional analyses of insects currently eaten by people.

However, an important caveat is that there is a disparity between what is IN the insects versus what is AVAILABLE to a person eating the insects.  The concept of bioavailability is still poorly explored, though papers such as the one cited here by Xia et al. (2012) tackle the question of how well a target organism can access the nutrients.  The topic of factors that govern bioavailability, though fascinating, is too involved for the current blog entry.  I treat this in more detail in my book (Cohen 2015), but suffice it to say that not all nutrients can be accessed equally well: so a protein that may be present in an insect may not get digested or absorbed because it is surrounded by indigestible cuticle, or it may have a sequence of amino acids that defies digestion.  The same question of bioavailability applies to other nutrients such as vitamins and lipids.  Testing the bioavailability and other aspects of food value of insects requires very specialized expertise, and even if a rat or rabbit model is used, the results may not translate into the human context.

One more point about proximate analysis (something like the food labels on peanut butter or milk cartons): the methods and competency of analysis are very crucial.  I have seen several treatments of insects’ food value presented, and when difficult to measure nutrients such as proteins are presented, there is often an over-estimation of the amount of protein present.  When researchers use standard methods such as elemental nitrogen, they are NOT directly measuring the actual protein.  For many foods (soy products, milk, vertebrate-derived meats, for example), using elemental analysis of total nitrogen and multiplying by a correction factor gives a good estimate of the protein value of that food.  HOWEVER, in insects, total nitrogen (elemental nitrogen) does not reflect exactly the true protein content due to false elevation of nitrogen levels such as the nitrogen in the cuticle and nitrogenous wastes like uric acid, which all give a value that increases the nitrogen but does not increase the protein.  This point has long troubled me because it causes an inflated value for the protein in most insect species.  The other point here is that the quality of the protein is not reflected by the elemental nitrogen analysis.  Low quality proteins that are poor in some of the essential amino acids would give a false high score in a protein evaluation.  Therefore, the appropriate analytical evaluations and interpretations are absolute essentials in judging the food value of insects for people.

The other issue of food safety raises many more questions that can be very challenging.  For example, crickets which are commonly used by entomophagy enthusiasts can carry lots of potentially dangerous microbes, and the concept of using soldier flies fed poultry feces brings with it challenges to deal safely with the Salmonella and other gut microbes know to be present in poultry.  Several websites exist that provide recipes for insects, and some of them are very responsible about suggesting that the insects be cooked by blanching in boiling water for at least two minutes.  These types of standards must become firmly established, vetted, and publicized before the questions of food safety can be put to rest.

This is only a cursory discussion of the issues of food value and food safety, but they are ones that current and future insects as food enthusiasts must be prepared to address.

Zhou, J. and D. Han.  2006.  Proximate, amino acid and mineral composition of pupae of the silkworm Antheraea pernyi in China.  Journal of Food Composition and Analysis 19: 850–853.