In previous posts, I have discussed Questions 1) and 2) with the answers that 1) I think that getting people to eat insects will not be an insurmountable barrier and 2) there are specific concerns that must be addressed to assure people that the insects that they are eating are of proven (vetted) food value and that they are safe in accordance to food safety guidelines.  I expressed special concern about getting right the analytical methods that provide information for food labels (proximate analyses) of insects to be used as food AND I suggested that careful scientific experiments needed to be done to demonstrate the efficacy and bio-availability of insects on a per case basis (i.e., what we learn about how bio-available cricket protein may be for humans does not translate exactly to the bio-availability of mealworms or some other insects.

This leads to my third question from the paragraph in the original blog post on eating insects: gathering vs. farming.

In the FAO-sponsored paper by van Huis et al. 2013, the authors make a case for the wide-spread acceptance and cultural tradition of using insects as food for people.  The photographs in this publication are dazzling, and the presentation of the insects makes them most appetizing.  However, most of the insects depicted in this paper are gathered (harvested from nature or as side-products from agriculture.  At this level of making insects available, there is total dependence on existing populations of insects, just as fishing and hunting are used to provide human food from the oceans, fresh water, and from the wild, in general.  Clearly there problem with reliance on gathered insects will meet with the same barriers that fishing and hunting have met when human populations rose to levels that exceeded the supply from nature alone. 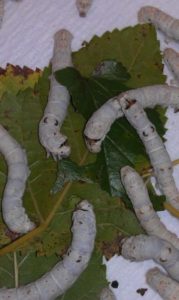 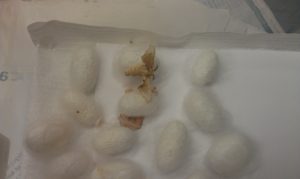 Of course, this gave rise to agriculture.  So the next step that far-thinking “insects as food advocates” suggest is agricultural production of insects: farming insects to be used as human food.  There are several possible forms of “insect farming:” 1) field operations where production takes place in agricultural fields or in greenhouses, 2) production of feeder insects as side-products of existing programs or insect production that is in place with other functions, and 3) in systems where insects are reared for food purposes as the primary goals.