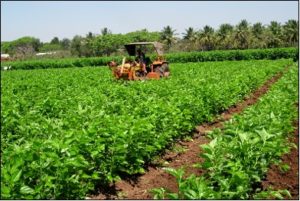 I have been trying to make useful distinctions between insect farming and insect rearing.  The differences that I suggest are that while farming is lower input and less controlled than rearing, rearing can usefully be distinguished with the incorporation of artificial diet.  While silkworms have been farmed for nearly 5000 years on their natural host (mulberry leaves), and honeybees have been managed but allow to feed on natural (or wild) foods, rearing with artificial diets began in the 19-teens when Drosophila species were given modified banana with yeast and agar added.  This set the stage for artificial diet-based rearing, which has been developing over the past 100 years.  I realize that if you grow a pepper plant in your lab or green house, and use that plant to support a colony of aphids, you are in a sense rearing the aphids.  But you are limited in your control over the plant’s nutritional value to the aphids.

So the distinction that I am making is based largely on INPUT and CONTROL.  With pre-farming  activities hunting, fishing, and gathering, the foods and other items like clothing, tools, etc. were not processed at all or not very much.  The early humans probably started off killing small animals by hand, grabbing fish out of the water, and picking plant materials.  As they started to use tools for hunting, fishing, and harvesting, they started to have a little more control, but when they domesticated plants and animals, they had higher levels of control, more predictable outcomes, and they were becoming agriculturalists (farmers).  I see insect farming as having input and control over the intended products.  The next steps add the control of the insects’ environment, its food, which insects breed with one-another, etc.  This tendency towards control gives much more reliable outcomes, and my insistence upon making rearing into a more and more scientific process is in line with the concept of predictable outcomes.

In the film clip on this page, I show the silkworms that I have been rearing on artificial diet.  But also, I include an image of the efforts that silk producing countries are making at reducing the labor and expanding the scope of silkworm farming such as the mulberry field in India where automation and machinery are being adopted to increase the yield of mulberry per hectare of land.  The same engineering organization is adding as much automation as possible to silkworm production, compared with the production of silkworms in the facility in Vietnam (which is still a very impressive process, though it may date back to hundreds or thousands of years of silkworm farms).

More on these points in future pages.